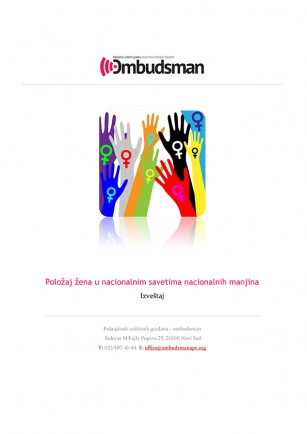 The Provincial Protector of Citizens - Ombudsman (PPCO) conducted a new research study on the position of women in the National Minority Councils (NMCs). The aim of the study was to establish whether the legal obligation of nominating 30 percent of the less represented gender on the voting lists was observed during the NMC elections in October 2014, as well as how many women are members of today's NMCs.

The results indicated that the number of women in NMCs has increased slightly. There are currently 106 women in NMCs, eight more than in the previous term. On average, women constitute somewhat more than a third of the NMC membership. Out of 14 NMCs that responded to the PPCO questionnaire, two have less than 30 percent women members. Another two have over 40 percent women members, whereas another three have less than 40 percent women. In their previous term, NMCs had almost three times more men than women - 93 cf. 39 respectively.

Two NMCs have a woman president. Nine have women vice-presidents, while men are nearly twice as represented in leading positions (e.g. 15 NMCs have men at the president's post). It is evident that difference of women cf. men decreases with the level of leadership, aka decrease in decision-making power within the NMCs. For instance, more women are at the post of the NMC secretary (seven women and two men). Women are more numerous than men only in the NMC executive services (36 cf. 14 repsectively).

Men are twice as numerous as women in the board president's role as well (27 cf. 14 respectively). Only the Education Boards have more women presidents (six women and fpur men).

Only three NMCs (Croatian, Macedonian and Slovak) have an organizational entity dealing with the position of women and protection of their rights.

Nine NMCs have done specific activities aimed at increasing the number of women in their decision-making and in politics in general prior to the NMC elections, whereas eight NMCs had campaigns for women to run for the NMC membership. Just like with the two previous research studies on the position of women in the NMCs, the PPCO points to the need for promoting women (in)to decision-making positions. NMCs should instigate women's engagement and inclusion in their ranks, organize gender equality and women's human rights trainings, as well as to contribute to the exercise of the gender equality principle in the society by applying it in their own activities.