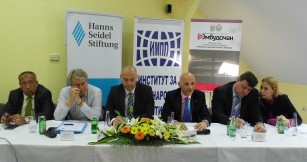 Migrations as security challenges along the Western Balkans Route was the topic of a three-day international conference that was finished in Palic yesterday. The intent of its organizers - the International Politics and Economy Institute from Belgrade, the Hanns Seidel Foundation in Serbia and Montenegro and the Provincial Protector of Citizens - Ombudsman (PPCO) - was that its participants consider legal, security and social aspects of challenges the migration crisis posed before the relevant authorities, as well as the human rights protection institutions, the media and the academic community in the countries of the region.

The Conference brought together several tens of representatives of various stakeholders. Over thirty presenters at the conference came from the academia, human rights institutions, international agencies, national migration authorities and the media from Bulgaria, Macedonia, Republic of Srpska, Romania, Russia, Hungary and Serbia. Besides the organizers, the contributors to the Conference were also representatives of the Ministry for Labour, Employment, Veterans and Welfare of the Serbian Government, the Commisariat for Refugees and Migration of the same Government, as well as the representatives of the judiciary with experience in handling cases involving migrants, refugees and asylum-seekers in Serbia. The authors of conference papers presented at the Conference came from the Russian Academy of Sciences from Moscow, Faculty of Law of Timisoara University in Romania, the Neofit Rilski South-West University from Bulgaria, the S. Climent of Ohrid University from Macedonia, University of Pecs in Hungary, Faculties of Philology, Law and Security of the Belgrade University in Serbia, the Military Academy, Crime and Police Academy, the Economics Academy, Criminology and Sociology Institute, European Studies Institute, the Business High School from Serbia, along with the Vojvodina Radio and Television Public Service and the PPCO.

The Conference topics tackled the causes of migrations, their legal challenges and solutions to them, socio-economical consequences, security and human rights in the context of migration, migrants' personal status and safety, media reporting about the migration crisis, as well as reactions to it. The Conference formulated conclusions and recommendations for relevant authorities, as well as other stakeholders (the academia, civil society organizations and the media), to serve as guidelines for their future actions concerning issues of migration, refugees and asylum-seekers.

Recommendations to the governments in the region, the funding agencies and the international community focus primarily on improvement of cooperation in Western Balkans. Besides a more intensive dialogue and cooperation with the neighboring and other Balkans countries affected by the migration crisis, within the framework of its relations with the EU Serbia should devise and implement an effective collaboration in harmonizing activities and measures aimed at resolution of the migration crisis, simultaneously also observing its Constitution and focusing on providing a more efficient response to the migration crisis. Furthermore, countries along the Balkans route should provide a more efficient access to the asylum-seeking proceedings for the migrants and full observation of the principles prohibiting forced exile or coercion to stay in the country.

Due to the duration and scope of the migration crisis, aka nowadays longer period the refugees and illegal migrants are staying in Serbia, the increasing burden on the national and the budget of the local self-governments, prevention of disturbing the public order and peace, as well as the need to provide legal and other proscribed assistance to Serbian citizens, refugees and illegal migrants, it is necessary to analyze the existing legal framework in Serbia in order to consider possible changes or amendments to the existing legislation, or adoption of new policies and regulations.

Mid-term recommendations to the aforementioned actors are that it is necessary to pay more attention to prevention of secondary movement of migrants, harmonize the border related legislation, check the status of the so-called safe third countries, as well as provide space, forums and platforms for inclusion of interested parties in these processes.

In the long run, it would be beneficial to resort to the practice of integrated border management. Migrants and refugees should be considered as persons potentially contribution to the local economy, and not only as a social burden. These persons need to be consulted, as much as possible and in coordination with the local self-government authorities, concerning their integration in local communities. All social actors should invest maximum efforts to make sure the migration crisis does not become a stumbling block along the way of the EU integration processes.

These recommendations need to be considered bearing in mind the needs and expectations of citizens of the countries along the migration route, as well as the fair and just need for providing humanitarian and other aid to the migrants, in line with the objective possibilities.