Personal Assistance to Children: Precondition to an Inclusive Society 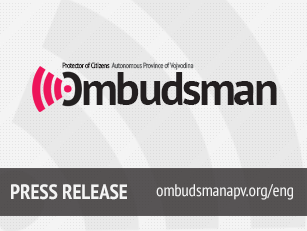 Towards the end of 2014 and at the beginning of 2015, the Provincial Protector of Citizens - Ombudsman (PPCO) conducted a research study on the implementation of the right of a child, aka pupil to personal assistance. A total of 35 (out of 45) local self-government units in Vojvodina answered the questionnaire sent to them by mail. By the time the study had been completed, only six of these units - besides already having general local regulations tackling this issue - had passed special rulebooks on regulating particularly the issue of engagement of personal assistant and which had been harmonized with the rulebooks of the relevant Ministries (welfare and education).

Regulating the issue of providing continuous personal assistance to children and pupils is significant because it is a precondition to exercise of basic children's rights. Anything concerning this right that welfare and education laws and by-laws do not regulate more particularly is left to resourcefulness, creativity, organization skills and abilities of the local self-government units, as well as parents and caretakers of children in need of such support. Insufficient regulation in this field causes many inconsistencies which, besides preventing children's rights exercise, could lead to procedural irregularities with the relevant authorities or failure to observe regulations in force. These problems go hand in hand with a lack of, namely failure to plan funds for personal assistance in the local self-government units' budgets, while in several units there are either no legal entities providing such a service or they have not been recognized as such. For instance, the study indicates that in half of the polled local self-government units personal assistants are often parents or close relatives of the beneficiary child, though the Rulebook on Particular Conditions and Standards for Provision of Welfare Services proscribes that a member of a beneficiary child's household cannot be considered a personal assistant.

Since the existing regulations do not cover either the qualification criteria for personal assistants (e.g. education, skills and personality) or the amount of remuneration for their work, the PPCO holds that such issues should be regulated at the national level. This way, local self-government units would have unified and clear preconditions for further regulation of major issues in this field, as well as an obligation to choose the best personal assistants and compensate for their services. This is particularly important because a child, aka a pupil needs continuous support.

The right of a child, aka pupil to personal assistance is a form of supplementary support, but it cannot be treated arbitrarily or considered secondary to other rights in the context of supporting a child in education and his/her everyday life. The purpose of this right is to provide a child as much independence and productivity as possible while meeting his/her personal needs, doing its everyday activities and fulfilling its duties, facilitating thus his/her communication with his/her environment and preventing or eliminating the consequences of social exclusion. At the same time, personal assistance is an indirect support to parents, families, teachers and schools. On condition that it is provided in an adequate way, this kind of support influences the quality of life of everyone involved quite significantly, creating more space for their increased dedication both to the child and their own personal and professional roles.

The report based on the research study ' The Right of a Child and Pupil to Personal Assistance', including the measures the PPCO suggested to the authorities in charge, is to be found on the PPCO website 9In Serbian).