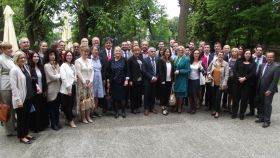 The position of persons with mental disorders dwelling in closed institutions was the focus topic of this week's two-day Belgrade conference of the South-East European National Torture Prevention Mechanisms (NPMs) Network attended by Prof. Zoran Pavlovic, SJD, the Provincial Protector of Citizens - Ombudsman and his advisors.

According to Milos Jankovic, the Acting Serbian Ombudsman, who addressed the participants on behalf of the host institution at the conference opening, persons with mental disorders dwelling in closed institutions are in a difficult and disadvantageous position, representing thus one of the most vulnerable groups of Serbian citizens.

The most frequent problems in proceedings concerning these citizens are lack of training with the police in face-to-face handling of these persons, as well as the issue of initiating and running proceedings involving criminal offenders with no reasoning ability. Additionally, there are many people with mental disorders in prisons with inadequate dwelling conditions for this population. Their mandatory psychiatric treatment is yet another unresolved issue.

Similarly, the issue of obtaining a voluntary consent of persons with mental disorders to be institutionalized is still one of the major ethical challenges in the proceedings run by relevant authorities, along with the proper and legitimate implementation of patients' physical restraint and isolation measures that, despite being justified and aimed at their best interest, are often carried out arbitrarely and even in irregular ways. This situation calls for a dialogue with the relevant authorities resulting in a different approach to persons with mental disorders.

The presenters on handling persons with mental disorders deprived of their freedom by the police, in prisons and during implementation of security measures, as well as on handling them in psychiatric hospitals and welfare institutions with limited public access, were ombudspersons and coordinators of the South-East European NPMs, along with psychiatry and forensic medicine experts.