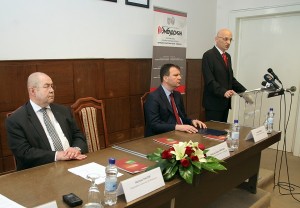 The first Provincial Protector of Citizens - Ombudsman (PPCO) Honorary Collegium Meeting was held at the Vojvodina Assembly today. Its purpose was to introduce the institution's 2016 Annual Report, as well as its activity plan for the current and fortcoming years, to the expert and wider public.

The first to addres the guests was Prof. Zoran Pavlovic, the Provincial Ombudsman. Reminding them of the fact that, at the time of its establishment 15 years ago, the institution he had been running since December 2016, was the first of its kind in the Republic of Serbia, Prof. Pavlovic thanked the attendees for their support to the institution so far and expressed his belief that the collaboration will continue in the future, primarily bearing in mind that one of its aims in the forthcoming six years would be to contribute to increasing citizens' trust in institutions as much as possible.

Greeting the attendees of the PPCO Honorary Collegium Meeting, the President of the APV Assembly Istvan Pasztor reminded them that it was the Provincial Parliament was the first to establish an ombudsman institution in the Republic of Serbia back in 2002, which is a fact to take pride in.

'We had dedided to do it believing firmly in the principles and foundations of a modern, contemporary society, rule of law and regulations, as well as due to the need to protect the dignity of each and every individual. These are the two pillars of any responsible and developed society and state. The PPCO is a corrective instance warning us about situations in which there is a gap between the law and justice and providing support to any individual feeling that the society has wronged him or her,' said President Pasztor.

Pasztor pointed out that the PPCO is a long-term institution, the need for which will pertain as long as there is discord between the law and justice, so it is in the best interest of all that it be a strong one, with developed capacities, in order to face challenges along its path as easily as possible. He also said that, just like before, the Vojvodina Assembly will fully support the work of the PPCO institution in order to strengthen it and promote its work.

'The first is providing all conditions for an independent and self-contained work, which is the substantial definition of PPCO the role and existence. Therefore, right at the beginning, I feel the need to emphasize that no one from us inteds to interfere in its work or to influence it in any way. It is a firm and consequent position, not only mine, but of the entire Provincial government. The second plain of our support is resolute insisting on legality in the work of all insittutions constituting provincial executive authorities. No one who is a part of provincial administration in any capacity will be in a position to count on any kind of tolerance concerning violation of anyone's human rights. Moreover, being a part of this administration means - and will continue to imply - a double mandatory commitment not to do it under any circumstances,' said Mirovic.

The president of the Provincial Government pointed out that, by its nature, the role of an ombudsan institution is very important in human rights exercise, while Prof. Pavlovic's presentation on the activities planned is reasurring, implying that he will fulfill the mission entrusted to him in the best possible way.

'Conclusions, recommendation, solutions the PPCO will formulate during its work represent not only a part of reports to be discussed at Assembly sessions, but a part of a, I dare say, joint mission to support all the comments, conclusions and guidelines in order to be another stone in the building of a house of an even higher level of human rights observation in our country and here in Vojvodina,' said Mirovic at the end of his address, wishin the PPCO institution fruitful work in the future.

Speaking about the PPCO plans, Prof. Pavlovic stated that the institution intends to continue and develop its existing activities, as well as to introduce some new ones, primarily in the field of institutional representatives' education in human rights and by conducting research studies. Several cooperation agreements with research and educational institutions have been signed with this aim so far, the first number of the PPCO Bulletin has been published, while the institution's Ethical Code is about to be adopted in order to pose as an example to all ombud institutions in our country. In 2017, a PPCO library will also be established, serving as a research and study reference center both for the expert public and law and humanities students.

'Every ombudsman's basic activity is to act upon citizens' complaints,' said Prof. Pavlovic. 'However,' he pointed out, 'an ombudsman's purpose is not to criticize for the purpose of being critical. A protector of citiznes points to the ways to improve the ways in which we could all work together in a bette, more efficient and responsible way. In the insterest of all citizens, in the interest of all of us.'

The guests at the event expressed their support to the work of the PPCO institution, emphasizing the need for its more intesive engagement in citizens', as well as public authority bearers' education in human rights, along with the need to advance the link between the human rights scientific and research sphere and ombuds institutions' practice in Serbia and the region by means of doing research projects and experience-sharing.

The PPCO Honorary Collegium Meeting Свечана is a unique meeting and networking opportunity among the most relevant human rights actors in the institutional human rights protection field in the APV and Serbia. Besides representatives of the Vojvodina Assembly and Provincial Government, the event was attended by several tens of representatives of national and provincial institutions, including the ombuds, the judiciary and executive authorities, scientific and research institutions, international organizations, such as OSCE Mission to Serbia and UN Resident Coordinator's Office in Serbia, as well as national professional organizations dealing with human rights exercise, protection and development.