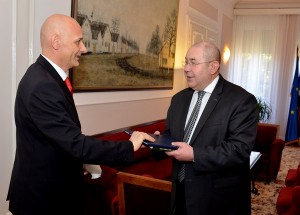 The Provincial Protector of Citizens - Ombudsman, Prof. Zoran Pavlovic, SJD, submitted the institution's 2016 Annual Report to Istvan Pasztor, the President of the Assembly of the Autonomous Province of Vojvodina (APV).

Pointing out that, according to the procedure and so-far good practice, the Annual Report of the Provincial Protector of Citizens - Ombudsman (PPCO) will be discussed at the next APV Assembly plenary session, President Pasztor expressed his contentedness with the work of PPCO, the institution dealing very responsibly with complex issues of human rights protection for the benefit of citizens of Vojvodina over the last 15 years.

President Pasztor and Ombudsman Pavlovic, as well as the General Secretary of the APV Assembly Nikola Banjac, discussed the future collaboration significance and prospects concerning numerous and versatile PPCO activities planned for 2017, aimed at further affirmation of this institution as a notable, professional and relevant aid to citizens wishing to exercise and protect their human rights.

According to the Provincial Assembly Decision on the Provincial Protector of Citizens - Ombudsman, the PPCO is bound to produce an annual report presenting its activities in the previous year, information on established malfunctions in the work of executive authorities, a general evaluation of the executive authorities' performance from the regulation implementation perspective, as well as suggestions for improvement of citizens' position before the executive authorities. The Report also contains data on the No. and structure of citizens' complaints, along with special parts concerning national minority and children's rights and gender equality.

Source: Assembly of the Autonomous Province of Vojvodina