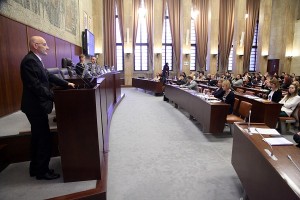 The 11th consecutive annual conference of the Life Without Violence Network of institutions in Autonomous Province of Vojvodina (APV), organized by the Provincial Protector of Citizens - Ombudsman (PPCO) institution, has been held in the APV Assembly today. This year's conference dealt with the responsibilities and obligations of relevant institutions in the light of the Istanbul Convention, aka the Council of Europe Convention on preventing and combating violence against women and domestic violence , as well as the changes introduced by the recently adopted Domestic Violence Prevention Law in Serbia.

In his opening address, expressing his pleasure that the event brought together representatives of all institutional systems on all level of government, expert public and the academia, as well as civil society oganizations, Prof. Zoran Pavlović, the Provincial Protector of Citizens - Ombudsman, stressed the aim of establishing and the basis of operation of the Life Without Violence Network, coordinated by the institution to the helm of which he recently got appointed:

'My wish today and here is that jointly we do all in order to restore citizens' trust in institutions. In order to show all the socially oppressed and victimized that they are not alone and that, no matter how prosaic it may sound, the state takes care about the interest of its citizens. We would also like to send a clear message to the perpetrators of violence that it will not be tolerated. That we will not turn our heads the other way and that we do have a clear strategy of no tolerance, penalization, but a mandatory perpetrators' treatment as well. It is only by a systemic, wholistic approach that it is possible to make a more significant move in  protection of women, as well as other victims of violence. It is only by reaching high standards in the work of all links in the proceedings chain that it will be possible to achieve the projected goals. The chain is as strong as its weakest link, and violence prevention cannot allow for such weaknesses.'

Besides Prof. Pavlović, the PPCO, other speakers addressing the attendees of the introductory plenary session were the following: Snežana Sedlar, the Vice-President of the APV Assembly, Slobodan Josimović, Deputy Prosecutor with the Novi Sad Senior Public Prosecutor's Office, Tanja Ignjatović from the Autonomous Women's Center and Prof. Tihomir Vejnović, MD, PhD,  the Manager of the Gyneacology and Obstetrics Clinic of the Vojvodina Clinical Center. The conference attendants also had a chance to participate in one of the four panel discussions on various topics. The panel on domestic violence as a security issue was run by Gordana Stevanović, Deputy to the Serbian Ombudsman, and Maja Bjeloš from the Belgrade Center for Security Policy. Specific risks concerning women from ethnic minority communities, with a special focus on Roma women, were the topic of the panel run by Goran Bašić, PhD, the Director of the Humanities Institute from Belgrade and Jelena Jovanović, an APV Assembly MP. Keynote speakers of the sexual violence prevention panel were Biljana Delić from the Provincial Secretariat for Healthcare and Nikola Petković, PhD, from the Novi Sad County Prison. Media reporting about domestic and violence against women was the topic of the panel run by Zorica Mršević, PhD, the Advisor in the Humanities Institute in Belgrade and Duška Bajić, a journalist and one of the authors of the 'While It's Not Too Late' series aired currently on the regional Vojvodina TV and concerning small arms and violence, including domestic violence. 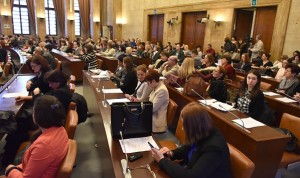 The conference brought together around 120 representatives of the judiciary (i.e. courts and public prosecutor's offices), police, welfare centers, healthcare institutions, local self-government units, national minority councils, as well as the local ombudsmen, experts and the academia. After presentations of conclusions from the four panel discussions, Veljko Delibašić, PhD, Associate from the Belgrade Univeristy, talked about harmonization of the Serbian criminal legislation with the istanbul Convention. With a presentation on the Genovese syndrome, Prof. Pavlović, the PPCO, closed the conference discussing the issue of responsibility of every single person affected by violence, especially its eye- and other witnesses, to do something in order to prevent it.

Just like in the previous years, the conclusions of this year's Life Without Violence Network annual conference will be sent to relevant institutions in order to point out current issues and problems concerning taking action in cases of domestic and gender-based violence. the conclusions will also tackle the development possibilities of the formal and legislative framework, as well as the work of the institutions aimed at prevention and elimination of violence.