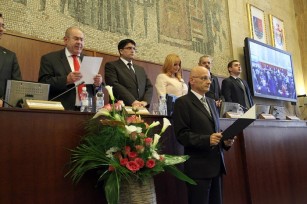 The new Provincial Protector of Citizens - Ombudsman of the Autonomus Province of Vojvodina is Prof. Zoran S. Pavlović, SJD, Associat Professor with the Economics and Judiciary Law Faculty of the Economics Academy Univerisity in Novi Sad, Serbia. He was elected new Provincial Ombudsman on today's session of the Assembly of the Autonomous Province of Vojvodina for the term of six years. The election of Prof. Zoran S. Pavlović, SJD, was supported by over two-third of the MPs, which is a census complying with the provisions of the Provincial Assembly Decision on the Provincial Protector of Citizens - Ombudsman concerning election of candidates for this post.