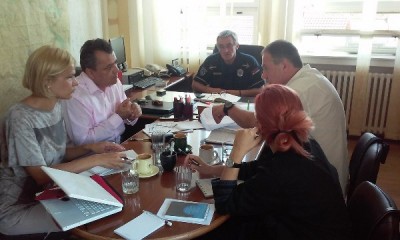 Due to the massive increase in the number of migrants flocking to the north of the Autonomous Province of Vojvodina, Serbia, Stevan Arambasic, Deputy Ombudsman to the Provincial Protector of Citizens - Ombudsman visited Kanjiza yesterday.

The aim of the visit was to establish to what extent are the local self-government and other authorities in charge are able to cope with the situation and provide for exercise and protection of migrants' rights granted by the international and national human rights legislation provisions. Deputy Arambasic focused especially on the exercise of their right to legal aid and interpretation, as well as that to healthcare. He talked both with the migrants, as well as the representatives of the local police, primary healthcare unit, Red Cross, welfare center and administration.

The police said that 90 percent of migrants were coming from Syria and that most of them, usually accompanied by their family members, claimed to be fleeing from war, aka military duty, and heading to Germany or Sweden. Kanjiza is a temporary target destination of 700-1,000 migrants daily, who usually come in late afternoons or evenings. They spend less than 12 hours in the town, waiting for the night when organized groups of even several hundreds of them are heading towards the Hungarian border. The fact that they are heading down the middle of streets and roads is a huge safety risk both for the migrants and vehicles. since the beginning of 2015, a total of 6,072 persons on their way towards the EU have been officially processed by the police in Kanjiza, 2,991 of them from the readmission proceedings. Both the prosecutors office and the border police are involved in handling migrant issues. The families are not separated during the proceedings. Each and every proceeding based on the Law on Foreigners is registered as a separate measure, so in this respect the relevant authorities in Kanjiza have implemented a total of 21,126 measures concerning migrants. For the sake of comparison, this year's total of such measures in Serbia has been 74,086, whereas last year in Kanjiza there were 1,278 persons handled on the ground of readmission or their foreigner status, with a total of 868 relevant measures implemented.

Local authorities, along with the other institutions and organizations in charge Deputy Arambasic visited, expressed its concern primarily for two reasons. Construction of a fence at the Hungarian border will slow down the crossing of migrants into this country and increase the number of those staying in the settlements close to the border for a longer time. This could cause further tension between the local population and migrants, which could, in turn, lead to deterioration of the safety situation in the northernmost municipalities in Vojvodina. Regardless of the fact that these people are not staying in the settlements longer than 24 hours, residents of Kanjiza perceive their presence a major, constant threat and disturbance of their everyday life and even business. Kanjiza is a tourist resort, with a renowned spa bath, but ever since the migrants started flocking the town this activity has practically stopped. 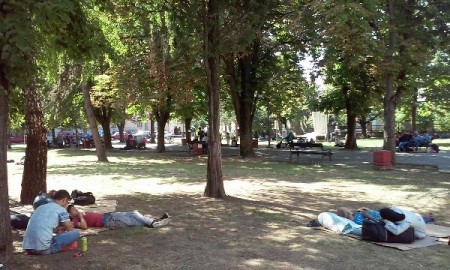 The citizens of Kanjiza are most concerned by the fact that the town has no public toilet. The consequences of unsanitary human excrements disposal in more secluded streets and parks in the town are potentially alarming from healthcare aspect. Since jurisdiction, authority and capabilities of the local self-governments in such situations are relatively limited, with available funds and human resources in Kanjiza nearing availability limits, a major cause of concern is also the forthcoming winter and the fact that migrants need an adequate basic dwelling and sanitation facilites.

Since last week, the authorities in charge have had the assistance of two interpreters for Arabic language provided by an international aid and relief agency. The municipality has a local Migration Council, while the police should start running a round-the-clock local migration office providing the arriving people with legal and humanitarian  aid, interpretation, healthcare and welfare services. Deputy Arambasic had a chance to visit the prospective migrants' drop-in unit and shelter site at the fairground in Kanjiza, the creation of which has only just begun.

The management of the Welfare Center in Kanjiza said that four professionals handling all work at the center cannot cope adequately with the usual workload concerning other citizens, let alone additional migrants related work. Ever since migrants started arriving, the misdemeanors court issued 248 rulings in proceedings concerning migrating minors without representatives of the welfare center participating in them in the capacity of an officially appointed custodian. In such cases, the welfare center is doing its best to handle further proceedings with maximum observation of all - often even contradictory - regulations in force. 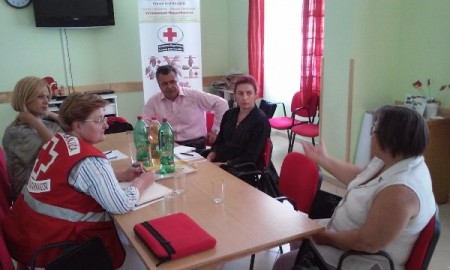 The local Red Cross claims that the humanitarian situation in Kanjiza is still not alarming. Confirming that all authorities in charge are doing their best to provide for undisturbed everyday life in all 12 settlements of the Kanjiza Municipality, the Red Cross holds that the current situation is equally a result of both the negligence of the local community and the increased number of arriving migrants. As example of their claim is the fact that there is no adequate public sanitation facility, including free toilets and potable water containers easily accessible to migrants, wither in the center of the town of any other suitable location.

Migrants address the local primary heathcare unit usually in the evenings. They mostly complain about leg pain and exhaustion. Those in need of medication are issued prescriptions if necessary, but they have to buy their own medicines. There have been no major health concerns in this population so far. Once handled, a copy of the form with the data about the medical handling of migrants is sent to other authorities in charge, along with a photocopy of any existing medical documentation the migrants may have with them. Along with the lack of any immunisation data with the migrant population, a major medical issue is the limited capacity and resources of the local primary healthcare units, as well as hospitals they refer their patients to.

Deputy Arambasic visited also the fairground with the to-be migrants' drop-in unit and shelter. There were also the representatives of the Refugee Commissioner engagen in the Presevo drop-in center in the south of Serbia, who came to assist with the establishment of a similar facility in Kanjiza. In this wire-fenced location at the entrance to the settlement from the direction of Horgos, there is so far a big tent potentially seating around 300 people temporarily, another, smaller one that could be used as a mediacal unit, as well as an old container with two toilets. The local authorities claim this drop-in unit and shelter will be functional as soon as possible, with potable water, proper sanitation facilities and connection to the town center. All institutions in charge in Kanjiza claim their mutual collaboration is excellent, addressing also the provincial and state authorities to do everything in their jurisdiction in order to prevent the migrants related situation in the northern Serbian municipalities bordering Hungary becoming a major humanitarian crisis.

Migrants who talked to Deputy Arambasic pointed out that they had had no bad experience whatsoever while in Serbia, praising at the same time the conduct of all representatives of state authorities and institutions, as well as citizens they came into contact with.

'We are fleeing from war. I was no human being until I crossed the Arabian Sea. Only then did a woman give me a pair of shoes because I was barefoot. The closer we are to Europe, the more we feel like humans because we are being treated like humans in your country. We're off to my brother's place in Germany,' said one of the migrants in the town park in Kanjiza, pointing to his six-member family with two small children and two teenage boys.