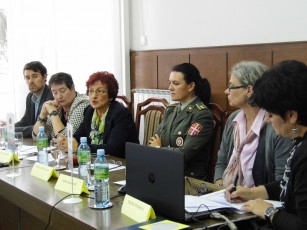 'Human rights observation, as well as peace-building and peacekeeping in a society, is not possible without women. This is why it is important to have more women in the security sector, with equal opportunities to those of men and recognized for their knowledge and expertise. It is equally important to have them in decision-making positions in this sector. Gender equality related complaints to the Provincial Protector of Citizens - Ombudsman (PPCO) indicate that there is still much space to improve the existing state and change of public opinion regarding the roles of women and men both in the society and in the field of security in general,' stated Gender Equality Deputy Ombudsman Danica Todorov at the Women Wearing Uniforms panel discussion held today in Novi Sad.

The panel discussion is one of the activities of the Women Wearing Uniforms project of the Social and Democratic Initiative Fund (FoSDI). The aim of the project is improvement of the position of women in the defense and security sectors and promotion of values of equality and equal opportunities along the recommendations of the UN Committee and the Security Council Resolution 1325 on prevention of discrimination of women entitled Women, peace, security.

The role and position of women in the army and the police was discussed by Mirjana Milenković, Lieutenant Colonel and officer with the Serbian Army Headquarters, Drаgаnа Pеtrоvić,a gender policies expert, Vladimir Bаrоvić, PhD, a journalist specialized in war reporting, Јеlkа Јоvаnоvić, Editor in Chief of the Novi magazin weekly and Nаtаšа Мilојеvić, the President of FoSDI and Project Coordinator. Along with the social stereotypes concerning women in the defense and security sectors, their presentation in the media, education and possibilities of professional development, the panelists also tackled the issues of implementation of the Resolution 1325, security and defense aspects of Serbian EU accession, as well as that of the position of women in post-conflict societies.

The Novi Sad panel discussion, just like the following one in Niš on Wednesday, 24 September, is a part of the final phase of the Women Wearing Uniforms project. One if its activities was also a regional conference, as well as filming a documentary on women in the Serbian army and police, which was presented this time as well. The documentary has already been broadcast on the regional Vojvodina TV and posted on the official website of the Serbian Ministry of Defense.