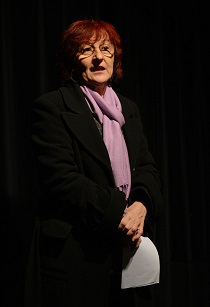 'Based on its mandate, the Provincial Protector of Citizens - Ombudsman (PPCO) has been supporting the VivisectFest as a form of human rights promotion,' said Danica Todorov, the Gender Equality Deputy Ombudswoman, on today's opening of the Vivisect exhibition at the Novi Sad Students' Cultural Center facility known as the Fabrika Club.

'As institution engaged in human rights promotion in various ways, we had the privilege to participate in this manifestation unique in so many ways,' said Deputy Todorov and, amongst others, stressed that human rights and freedoms are often taken for granted. This is why we often fail to see the challenges of many people all over the world trying to implement their human rights. We also often forget that we share a common responsibility for human rights observation and their exercise in everyday life for the benefit of every single man, woman and child.

'Sometimes the gap between the actual and the wished-for world seems insurmountable, but the hope that a different world is not only possible, but achievable, exists, ever again inspired by all those working on the development and advancement of human rights culture and their protection. The contribution of artists and the media, exhibitions and films, as well as projects such as the Vivisect Festival, in this respect is very special,' said Deputy Todorov. 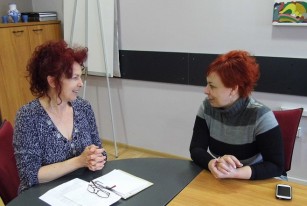 The National Minorities' Rights Protection Deputy Ombudswoman Eva Vukasinovic started a series of meetings with presidents of the newly elected National Minority Councils (NMCs) with seats on the territory of the Autonomous Province of Vojvodina (APV). The aim of these meetings to discuss issues relevant for each national minority and ways in which its members hold the Provincial Protector of Citizens - Ombudsman (PPCO) institution could contribute to a more successful exercise, development and protection of their individual and collective rights.

The key issues faced by the NMCs stem from the fact that they are not recognized in other laws concerning national minority communities members' rights exercise directly or indirectly. NMCs are formally neither government institutions nor public authorities or citizens' associations (i.e. non-governmental organizations), but they do perform public authorities and are funded from the state budget. This had direct implications concerning planning and implementing their activities since funds from the budget are transferred to their accounts at irregular intervals and are always late. Some of the topics of today's meetings with the Presidents of the Slovak and Romanian NMCs, Ana Tomanova Makanova and Daniel Petrovic respectively, were the experience of the last NMC elections, as well as the representation of women in them. 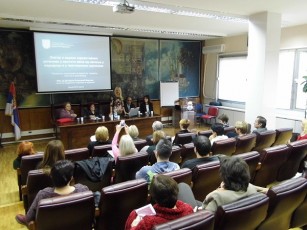 The campaign concerning the role of healthcare in protecting women from domestic and partnership based violence has started today in Pancevo. It is implemented by the Provincial Secretariat of Healthcare, Welfare and Demographics (PSHWD) in collaboration with the Provincial Protector of Citizens - Ombudsman PPCO and is supposed to bring together representatives of primary healthcare units, hospitals, the district Public Health Institutes, patients' rights protectors and members of the Healthcare Councils with the local self-governments in the Autonomous Province of Vojvodina (APV).

The first workshop was held in the seat of the seat of the local self-government in Pancevo. The presenters were Danijela Stankovic Baricak, MD, Assistant to the Provincial Secretary of Healthcare, Welfare and Demographics, Biljana Delic, the Head of Planning and Analysis Section in the Provincial Secretariat, Vasa Petrovic, MD, PhD, General Manager of the Primary Healthcare Unit in the Municipality of Indjija, Gender Equality Deputy Ombudswoman Danica Todorov and Andrijana Covic, a PPCO Associate. In the light of domestic and partnership based violence against women, they spoke about its indicators and implications as related to healthcare, detection and documentation as a precondition to its systemic prevention through institutions in charge, as well as experience in healthcare handling cases of such violence. 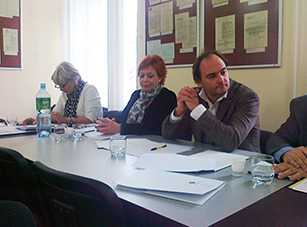 Serbia needs a new minority policy focusing on integration, inter-ethnic and intercultural communication and cooperation. The existing policy has segregating effects and leads to a parallel life of minorities as opposed to the majority. The responsibility for it is both with the state and the minority elites which, striving to stay in power, influence the minority communities in a way that makes them ever less open. These are some of the observations from the presentation of the Integrating Minority Policy Communication Strategy presented yesterday in Novi Sad by the Ethnic Relationships Forum.

'It is discouraging and worrying that today, fourteen years after the October upheaval, there is still talk about the need to make a step forward in the field of minority policy, instead of the step having been already taken,' pointed out Aniko Muskinja Heinrich, the Provincial Ombudswoman.

NPМ оn the Rights of Persons With Mental Disabilities: The New Act is a Step Forward, Its Implementation a Challenge 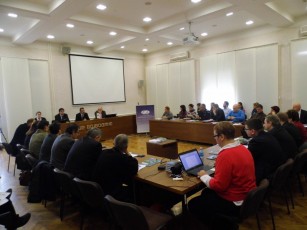 Involvement of all relevant instances in proceedings concerning the rights of persons with mental disabilities (PMDs), esp. that of the systemic human rights protection mechanisms, is of utmost significance in protection of their rights, particularly of people facing institutionalization or already using services of a specialized healthcare or welfare facility. In their address at the opening of the round table entitled 'The Role of the National Torture Prevention Mechanism (NPM) in Combating Torture, Inhuman or Cruel Handling of PMDs' the Deputy Serbian Ombudsman Milos Jankovic and Deputy Provincial Citizens' Protector - Ombudsman Stevan Arambasic agreed that, over the course of the last four years, the relationship of the institutions and facilities providing services to PMDs and the NPM developed from initial antagonism into collaboration focusing on a common goal.

Read more: NPМ оn the Rights of Persons With Mental Disabilities: The New Act is a Step Forward, Its...

Learning to Live Diversity Together 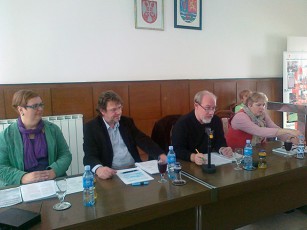 School is the best place to learn about one's own and other cultures, human rights and discrimination because it provides students with an opportunity to learn about intercultural communication, to acquire and develop intercultural skills. This was the conclusion of the round table discussion entitled Living Interculturality, Teaching and Learning Using the Example of the 'Multiplication - Living Tolerantly' Project. The round table was the final project event hosted by the Panonija Civic Association from Novi Sad, Serbia.

On this occasion, Ankica Dragin, the PR Advisor to the Provincial Protector of Citizens - Ombudsman (PPCO) and one of the authors of the Vojvodina Students on Discrimination research study report presented it to the round table participants. The study on the high school students' perception of (ethnicity based) discrimination was conducted in 12 high schools in Autonomous Province of Vojvodina (APV), Serbia in 2011, the year in which young people had been involved in a series of serious interethnic incidents in the APV. 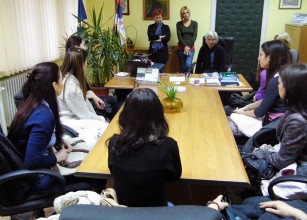 Third year students of the Law School of the University of Novi Sad have started their internship with the Provincial Protector of Citizens - Ombudsman (PPCO) institution today. This is the second subsequent school year the students have been coming to the PPCO.

The internship is a part of their curriculum with the Government Law subject. This semester, ten students will do it in order to learn more about the authority and jurisdiction of the PPCO institution, as well as the legal framework of its operation.  During the one-week internship the students will have a chance to experience the process of handling citizen's complaints, office and client work and to analyze selected cases from the PPCO practice for the purpose of their studies.

A Decade of the Life Without Violence Network 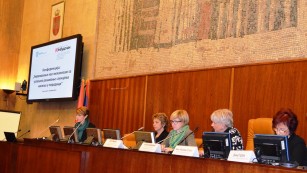 At the beginning of this year's 16 Days of Activism to Combat Violence Against  Women, the Parliament of the Autonomous Province of Vojvodina (APV) hosted the tenth jubilee annual meeting of representatives of the Life Without Violence Network member institutions and public services on 25 November, the International Day of Combating Violence Against Women. The Network was founded a decade ago at the initiative of the Provincial Protector of Citizens - Ombudsman (PPCO).

This year's conference topic was networking as a mechanism for successful handling of domestic violence cases. In her opening address and reflecting on the everyday work the PPCO, Aniko Muskinja Heinrich, the Provincial Ombudswoman, stressed that the Institution had been constantly pointing out that domestic violence is the most widespread form of human rights violation.

Read more: A Decade of the Life Without Violence Network 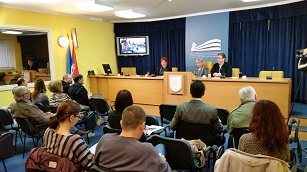 Referring to its aims and the significance of monitoring the work of the national minority councils (NMCs), Aniko Muskinja Heinrich, the Provincial Ombudswoman, pointed out that it was clear right after the constitution of the NMCs back in 2010 that the implementation of the National Minority Councils Act would be a challenge.

' The PPCO found itself in a consulting role, being asked for advice, opinions and clarifications re. certain provisions of this Act. The PPCO decided, right at the beginning, that it would check the extent to which the local self-government units understood and comprehended this Act, whereas the NMCs were asked for information about the exercise of their jurisdiction,' said Muskinja Heinrich, stating also that the collaboration with the local self-governments and the NMCs was constant throughout the reporting period in order to find solutions for all the challenges. 'This is why, four years later, we have decided to summarize the entire work of the NMCs and to make these comprehensive data available to the public,' concluded the Ombudswoman.

Experience in Processing Cases of Domestic Violence Against Women 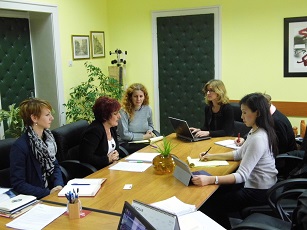 The Provincial Protector of Citizens - Ombudsman (PPCO) has been included in the international qualitative research on functionality of the national and local mechanisms for fighting violence against women conducted by the American non-profit organization Advocates for Human Rights in collaboration with the Autonomous Women's Centre from Belgrade.

The Gender Equality Deputy Ombudsman Danica Todorov and Expert Associate Andrijana Čović presented their experience in working with the women complainants who had been victims of violence and examples of collaboration between the PPCO and other institutions in charge of processing domestic violence against women.

Researchers were introduced to the experience of coordinating the Life Without Violence institutional network aimed at facilitating more efficient processing of domestic violence cases founded on the initiative of the PPCO in 2005.