Visit of the OSCE High Commissioner on National Minorities Delegation 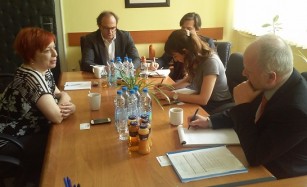 The aim of today's visit of the OSCE High Commissioner on National Minorities delegation to the provincial public services and institutuions was to discuss national minority rights protection issues. The host of the meeting in the Provincial Protector of Citizens - Ombudsman's (PPCO) Office was Eva Vukasinovic, the National Minority Rights Protection Deputy Ombudswoman.

The High Commissioner's representatives came to Vojvodina, Serbia to learn about the implementation and functioning of the human rights protection legal and institutional framework on all levels of administration. Visits to the relevant provincial and national institutions are expected to provide input for creation of activities concerning revision of the existing and creation of a new, more efficient system of minority rights protection in the Kyrgyz Republic.

The discussion during the meeting concerned the state of minority rights in Vojvodina and Serbia, functioning of the National Minority Councils and proceedings of the PPCO in the minority rights field, esp. as related to official use of minority languages and script and education. 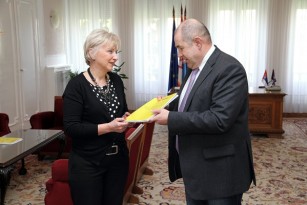 The report is actually an evaluation of the state of affairs in human rights exercise, protection and advancement in the Autonomus Province of Vojvodina, Serbia, esp. as related to executive authorities and public services. It also comprises data on the number and structure of citizens' complaints, failures of the public authorities to act according to the regulations and for the benefit of citizens, as well as positive feedback and points of improvement addressed to them.

The Provincial Ombudswoman, Aniko Muskinja Heinrich, pointed out that, just like in the previous years, several thousands of citizens addressed the institution for various reasons, whose mandate is not to control the executive authorities, but to protect the rights of citizens addressing it with a human rights violation claim. She also expressed her satisfaction with the work of the national authorities, which were most forthcoming during the Ombudsman proceedings, esp. the Vojvodina branch of the National Pension and Disability Fund, the local police units of the Ministry of Interior Affairs, as well as the regional branch of the Taxation Office of the Finance Ministry.

President Pasztor said that the Report will be discussed at one of the following sessions of the  Vojvodina Parliament and expressed his content over te fact that, judging from the Report, it is evident that citizens of Vojvodina trust the Provincial Ombudsman, perceiving it as a significant and competent institution of integrity.

The PPCO 2014 Annual Report (in Serbian) can be found here. 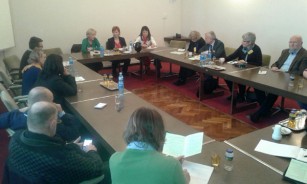 After the talk to the European Commission expert mission two days ago, Aniko Muskinja Heinrich and Eva Vukasinovic, the Provincial Ombudswoman and her minority rights protection Deputy, talked to the representatives of German human rights NGOs yesterday.

Aniko Muskinja Heinrich introduced the NGO activists to the notion, history and establishment  of the ombudsman institution in Vojvodina and Serbia, along with the specific organization, structure, mandate and activities of the Provincial Protector of Citizens - Ombudsman. In her introductory address, Eva Vukasinovic referred the German guests to the most notable laws regulating minority rights, the national councils' concept, as well as the issues faced by minorities in their human rights exercise.

The representatives of German human rights NGOs were particularly interested in political organization of minorities, the national councils and the Coalition of Jewish Municipalities in Serbia, posting multilingual name plaques on institutions, authorities' and public buildings, education in minority languages, as well as teaching and learning Serbian as non-mother tongue in schools. 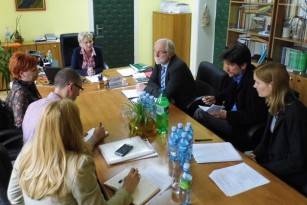 Mr. Hoffmann was also introduced to the position that the major issue concerning minority rights exercise is a declarative, rather that substantial existence of will to work their development and advancement. It is necessary to provide for the conditions for the ethnic, aka national minority rights to be exercised in such a way that it also means an improvement of the quality of everyday life for all citizens of the Autonomous Province of Vojvodina, aka the Republic of Serbia. 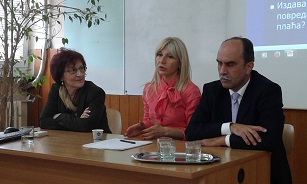 The last of the seven workshops concerning the role of healthcare in protecting women from domestic and partnership based violence has been held today in Novi Sad. The Vojvodina Public Health Institute hosted around thirty representatives of primary healthcare units, hospitals, the Public Health Institute, patients' rights protectors and members of the Healthcare Councils with the local self-governments in the South Backa District.

The introductory presentation of the Assistant to the Provincial Secretary of Healthcare, Welfare and Demographics Danijela Stankovic Baricak, MD, addressed the domestic violence indicators, healthcare implications and options for its prevention. If they want to provide adequate support and prevent this phenomenon, healthcare staff, esp. those dealing with women's health, must be well introduced to all these and recognize them as a consequence of violence, a process not always straightforward. A research survey of the Provincial Secretariat concerning the response of healthcare in the Autonomous Province of Vojvodina (APV) to domestic violence indicated a need for education of healthcare staff in applying the Protocol for documenting violence cases and initiating further proceedings. Only timely detection and detailed documentation of domestic and partnership based violence cases will provide for a better comprehension of the consequences and proportion of this phenomenon and efficient implementation of prevention measures.

A Women's Textbook Initiative in the Vojvodina Parliament 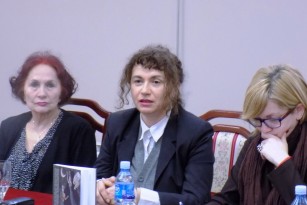 The Women's Parliamentary Network (WPN) of the Parliament of the Autonomous Province of Vojvodina (APV) in collaboration with the Provincial Protector of Citizens - Ombudsman (PPCO) initiated changing of the literature curricula in comprehensive and professional high schools.

In order to draw the experts' attention to the lack of gender perspective in the Serbian language and literature curricula, primarily in high schools, as well as to instigate the necessary change, the WPN and PPCO have organized a round table discussion entitled 'A Women's Textbook Initiative' in the Vojvodina Parliament today. The participants have been introduced the 'Women's Textbook' by Vera Kopicl from Novi Sad, its publication funded by the German Organization for International Collaboration (GIZ).

Read more: A Women's Textbook Initiative in the Vojvodina Parliament 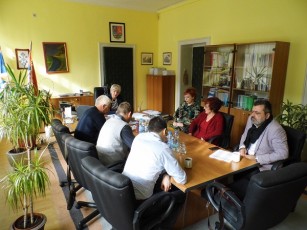 Citizens often point out corruption as one of the major obstacles in the way of their human rights exercise. A significant proportion of their complaints concerns non-transparent decision-making regarding project funding awarded on the public services' calls for proposals. There is a lack of rulebooks concerning participation criteria in the public calls for proposals and no understanding of the essence of the discretionary authority. Applicants are often left with no possibility to use legal remedies. Formal procedures and deadlines are often not observed, with a series of other irregularities occurring along the way. 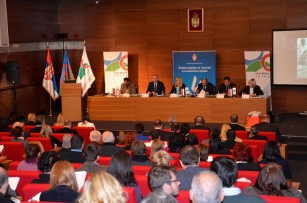 The participants pointed to the key reasons due to which the 2009 Strategy failed to produce the expected results. They are lack of strong political will and interest with the public services, no clearly defined strategic paradigm, no public authority to manage its implementation, etc.

In order to diminish the discrepancies between the Roma and the rest of the population, before defining a new strategy it is necessary to deal with the dilemmas concerning the number of beneficiaries using the strategic and affirmative measures, as well as concerning the basic unit upon which the Roma inclusion process relies. There were opinions that considering Roma families the basic inclusion reliance factor is conservative and excluding. 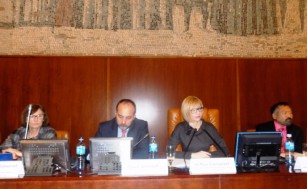 On 4 February, Vojvodina Parliament was the venue of the Gender Equality Law model debate proposed by the Serbian Ombudsman. The event, hosted by the national Ombudsman and the Vojodina Women's Parliamentary Network (WPN), brought together national and provincial MPs, representatives of local self-governments, the national and provincial ombud institutions, the OSCE Mission to Serbia, gender equality mechanisms from Vojvodina, women's civic organizations, experts and other interest groups.

Danica Todorov, the Gender Equality Deputy Ombudswoman to the Provincial Protector of Citizens - Ombudsman (PPCO), was one of the most noted debaters with over a decade's experience in the institutional provisions towards implementation of gender equality. Besides elaborating on a whole list of the PPCO amendments to the model, she pointed out that the debate about the new model of the Law is important because it sheds light on the progress in the field over the last couple of years and the (in)applicability of some of the provisions of this Law in practice due to various reasons, all in the shade of a lack of political will to provide for its implementation. The worst consequence of such a state is that the national institutional gender equality body affiliated to a national ministry has been terminated and replaced by a coordination body of a lesser status.

Meeting with the Deputy Head of OSCE Mission to Serbia 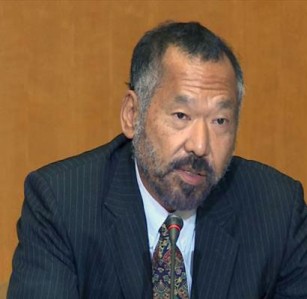 Mr. Uyehara was interested in the process of adoption of the new Gender Equality Law in Serbia and the situation in the field of gender equality in Vojvodina. A special topic of interest was whether the National Minority Councils have recognized the significance of this issue in their work.

Aniko Muskinja Heinrich expressed her hope that the collaboration of the Provincial Protector of Citizens - Ombudsman institution and the OSCE Mission to Serbia will continue and even intensify in the future.

Michael Uyehara was one of the attendees of the debate on the new Gender Equality Law model.